The five main gear components used in snorkelling or free-diving are a face mask, flippers or fins, a snorkel, a weight belt and a wetsuit. When free-diving, the diver's air supply is limited by lung capacity, and so snorkelling is a shallow-water activity. Scuba divers carry air tanks, in addition to the basic snorkelling gear, which enable them to stay under water longer and to work in deeper waters. Divers are still restricted by the amount of air that can be stored in the tank; if long periods under the water are required, hookah gear is used. Hookah divers are supplied with air via an air line from a compressor in a boat.

Divers in different fisheries also use several hand-held implements to aid in collection. Abalone divers use a chisel-like tool known as an abalone iron to remove the abalone from the rocks, and a netting bag to hold the abalone collected. Divers collecting Blue Mussel scrape them off pylons and rocks with a knife and place them in a bag. Divers collecting Tropical Rock Lobster use hand-held implements such as snares, nets or spears to catch the lobsters. Divers collecting Pearl Oyster, Sea Urchins and Commercial Scallop collect them by hand and place them in a bag similar to that used by abalone divers. 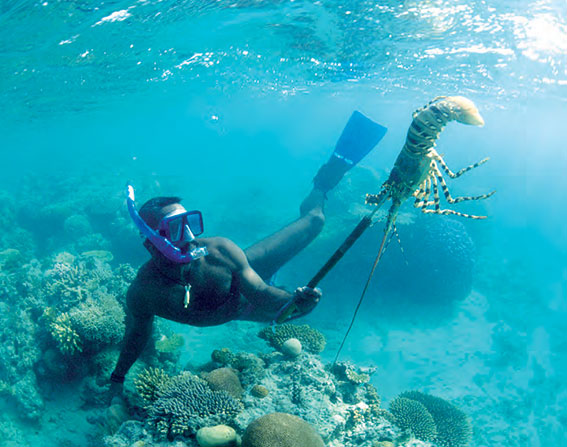 Diver using a hand-held implement to aid in collection